Software development is rising in the ranks of lucrative and fulfilling professions, with salaries rivaling those of physicians and attorneys—with much less schooling required. But unlike law and healthcare, the tech industry is heavily dominated by men.

It wasn’t always this way. An episode of NPR’s podcast Planet Money recently raised the question, “When did women stop coding?” The number of women in U.S. computer science programs looked good leading up to a very specific point in history.

If you know any programming history, then you’ve probably heard of Ada Lovelace and Grace Hopper. These and other women had a huge influence on modern programming. They may have been hailed as leaders of the industry in their time, but now men such as Steve Jobs, Bill Gates, and Mark Zuckerberg—the modern trinity of the tech world—are hailed as the innovative programmers of the last 30 years. Where are the women who should be household names listed among the men?

The History of Human Computers

During World War II, a “computer” was a job title for someone who programmed the first general-purpose electronic computer, commissioned by the Ballistics Research Laboratory of the U.S. Army. Its purpose was to accurately target long-range ballistic weaponry. Rosie the Riveter encouraged more women to join the workforce, especially in war-supporting factory roles, and only 25 percent of women planned to leave the workforce after the war ended. Because 16.1 million men were serving in the military, women were given the opportunity to take on roles previously held by their male counterparts.

While many men took on engineering and programming roles in the decades following the war, women continued to work in science and technology. Many of the first programmers—who worked in binary—were women like Elsie Shutt, founder of Computations, Incorporated (CompInc.), and Grace Hopper, who created the first compiler. Fifty percent of programmers were female, and the number of women who pursued Computer Science degrees continued to grow. 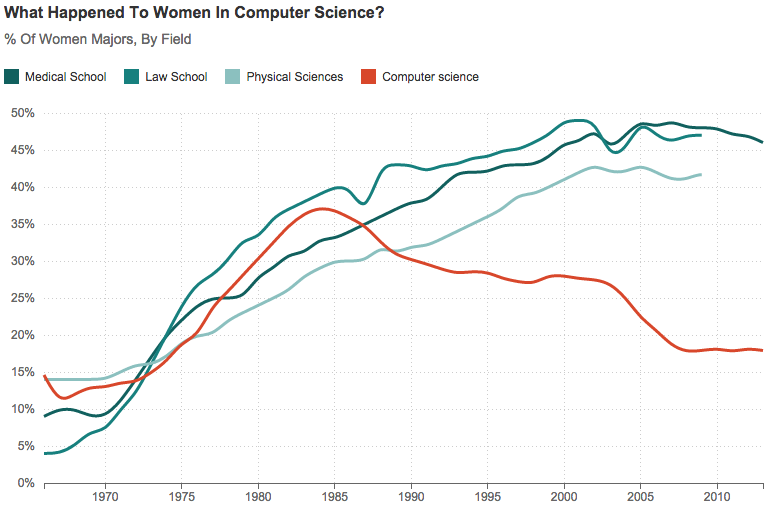 In the mid-1980s, computers were starting to become a household item. They were primarily seen as tools and toys for business and gaming, and products in these two categories were marketed towards men.

Early college-level computer science programs expected students to start the program with a certain level of programming knowledge, something they would only have if they had regular access to a computer in high school or earlier. Since computers were marketed towards a male audience, they were purchased and placed in the boy’s room, making them less accessible to girls in middle or high school.

Women were pushed away from programming by both male-centric stereotypes in ads and movies, and by publications that called them “horribly inefficient and wasteful things” (yes, that’s a direct quote from Stephen Levy’s Hackers: Heroes of the Computer Revolution).

Fear of receiving similar treatment from their male peers may have kept some women away from computer science programs. Of those who did pursue computer science degrees, half ended up switching majors. Their decision to leave had nothing to do with lack of success, as a full 50 percent of the women who left were on the Dean’s List.

After women started to exit the computer science field, some colleges and universities tried to reverse the trend by adding truly introductory courses for students who had never used a computer before, but the narrative that programming was for men had already been too widely circulated.

Unfortunately, the numbers have continued to slip over the past 30 years. Today only 18% of computer science graduates are women. This and other issues are continuing to prevent women from considering programming as a career.

While the number of women who choose computer science as a major is still low, the many other avenues for women to join the tech industry are bringing change. Organizations like Ada Developers Academy, Girl Develop It, and Girls Who Code are encouraging more women to try their hand at programming. Our Diversity Scholarship Fund is one of the many ways training programs are removing potential barriers that may discourage women from pursuing programming as a career.

As Code Fellows comes up on its third birthday, we’ve already seen a shift in the makeup of our courses. Our most recent Code 201 course had as many women as men, and the the percentage of women who apply and are accepted in our more advance courses is steadily going up. While not all of our courses are a perfect 1:1 ratio of men to women, we’re heading in the right direction.

Slowly the narrative is changing, and we’re seeing women return to the field of programming.