Develop faster in Rails with Zeus

Waiting is my least favorite part of developing. In Rails, every time you run a test or a rake command, even if it’s just a few seconds, it’s seconds that stop your flow.

Zeus is a gem that is out to solve that problem. It preloads the Rails app so that when you run commands, it doesn’t have to boot up Rails, which shaves time off of your commands. Like this:

Here are the supported Zeus commands. It makes running all of these faster:

I ended up using this command to get the rvm patch working:

Now go to your Rails app’s directory and do: 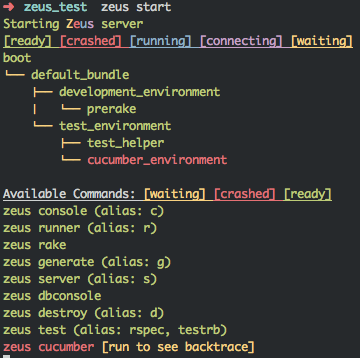 After that, simply run the Zeus commands listed above!

Note: Since RSpec support files and FactoryGirl factories are preloaded, Zeus will need to be restarted to utilize changes to those file types. To restart, ctrl+c to stop Zeus and then run zeus start.

Zeus creates a .zeus.sock file you should add to your .gitignore_global file so that you don’t commit it.

So I ran into a few problems using Zeus, many of which were documented in the GitHub repo. Here are the fixes I used.

Remove the require statements below in spec/spec_helper.rb to solve problems with RSpec. RSpec was running twice or getting undefined methods when I ran tests, but this fixed it (Source 1, 2).

If you have problems with the zeus rake command, try zeus rspec spec. I had to do this to fix an “Uninitialized constant FactoryGirl” error (Source).

Zeus can be picky about the order of your gems in the gemfile. Try reorganizing it or even adding it to your gemfile (although that will slow it down).

Lastly, if you see things behaving incorrectly, try restarting Zeus by using ctrl+c to stop it in the terminal where you’re running Zeus, and then running zeus start again.

If you use Sublime Text 2, utilize it with Sublime Text 2 Ruby Tests, which allows you to run tests inside of Sublime Text. Install it via the Package Manager or the GitHub repo. Then customize it to use Zeus by finding the RubyTest.sublime-settings file inside of the RubyTest package directory and copy it. Place the copy in the package User directory. Open the copied file and replace the run_cucumber_command and run_rspec_command settings with this:

Let me know your experience with Zeus and if there are any other speedy gems out there by tweeting me or emailing me.

Check out the original post and more resources on Billy’s blog. 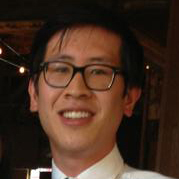 Idealistic, optimistic and compassionate, Billy strives to make a positive impact on the world through his work, relationships and every day choices. Outside of coding, he spends his time consuming everything on the internet using Hacker News and Feedly, meditating and thinking about happiness, listening to music, being vegan, and hanging out with his girlfriend, dog, friends, and family.