Diversity—or rather, the lack—is stirring a lot of good conversations in the tech industry today. If you Google “minorities in tech,” over 230 million results come up, ranging from articles that highlight diversity issues to companies and organizations that are pledging to do something about it.

In an effort to be more transparent, many tech companies are releasing the demographic makeup of their teams. Unfortunately, the results are cringe-worthy.

Facebook’s, Apple’s, and Google’s tech teams are all over 79% male with a white majority. Twitter was even worse: its 2014 report showed that only one out of ten people on its tech team were female.

If the tech giants that most, if not all, developers aspire to work for are struggling to improve the diversity of their teams, then is the issue a hiring bias, or does it go deeper? There are three major problems facing the tech industry and affecting its ability to make any progress in diversity.

The lack of diversity stems from the larger issue facing tech: scarcity. There simply aren’t enough developers to go around, whether they’re male or female, African American or Asian, Hispanic or white. This has led to skyrocketing salaries for programmers across the country. In less than a decade, the median salary for software developers went up 19 percent, and is currently hovering just under six figures.

With supply so far below demand, companies are in constant fear that their best devs will be poached by other employers. They are offering more enticing perks to get talent to stay and are doing little to rock the boat in an industry that already has a high turnover rate.

One solution to the scarcity problem is immersive training programs, like the kind available here at Code Fellows. The code school industry is continuing to grow, with 67 full-time code schools training an estimated 16,056 developers across the country in 2015.

Computer science degrees have been the primary educational path to a career in programming, but cost anywhere from $7,000 to $35,000 per year at community and state colleges, and even more at private universities. That figure doesn’t account for room, board, or the two to four years it takes to complete the program.

In 2012, over 45,000 undergraduate computer science degrees were awarded across the U.S. The demographics alongside those of some of the leading tech companies weren’t surprising: 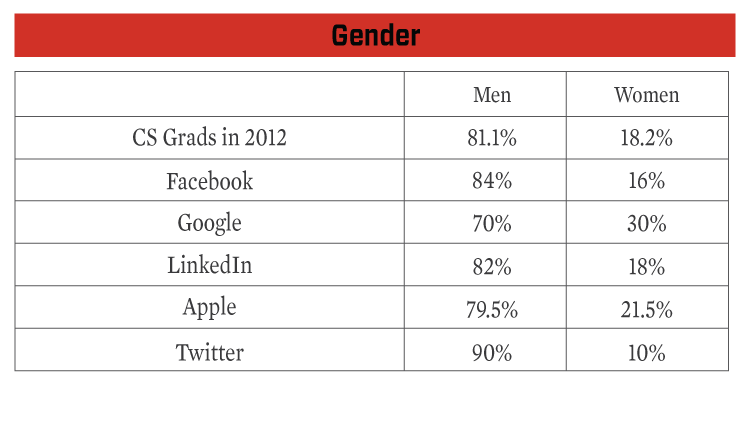 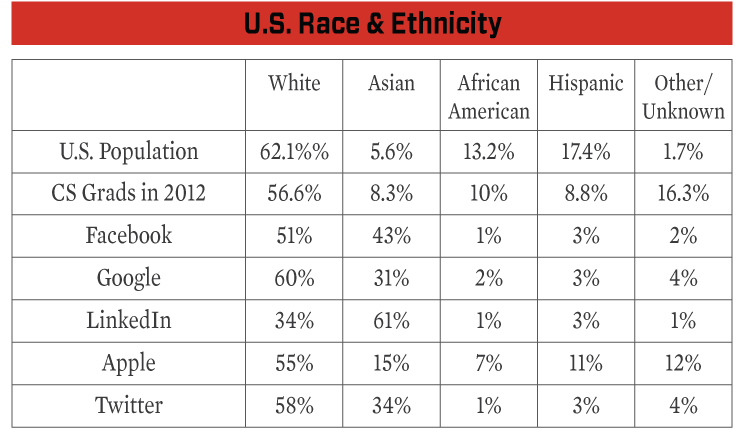 If companies are looking at universities to source new talent, then the demographic makeup of their teams makes more sense.

But not all developers studied computer science at the college level. According to Stack Overflow’s 2015 survey, a full 41.8 percent of respondents were self-taught programmers!*

For students who decide to pursue a degree or learn to program on their own, they’ve likely had independent encouragement and opportunities along the way that aren’t afforded to all young students. Despite a push for more computer science programs in K-12 schools, AP computer science classes are only in 5 percent of high schools. Only 26 states allow computer science classes to count towards graduation requirements. This means students aren’t given full opportunity to explore computer science unless they come across it on their own and have ample access to a computer, and Hispanic and African American households are less likely than Caucasian households to have access to a desktop or laptop computer at home.

Code schools provide an alternative to self-teaching or computer science degrees for aspiring software developers. The most common languages to learn in an immersive program—generally ranging from one to six months—are Ruby, JavaScript, and .NET. Over 40 out of the 67 schools in the industry also offer scholarships, many of which are specifically intended to improve diversity in tech.

While the exclusion is often unintentional, the assumptions around women and minorities and the pressure to fit in with the “geek” culture is pushing out those who don’t fit a specific stereotype.

Companies are taking steps to combat the reputation and makeup of the tech scene. Problems are being faced head-on by companies offering internal training for employees. Others are opting to build remote teams or refine their recruiting practices.

Encouraging more women and minorities to consider and pursue software development as a career is the reason we launched our Diversity Scholarship Fund in partnership with local tech companies. Our goal is to remove the financial barrier and encourage more individuals who are underrepresented in the tech scene to explore the full potential of a career in tech.

Why Does Diversity Matter?

Software Architect was rated number one on CNN’s Top 100 Jobs in America in 2015. The scale included pay, growth projections over the next decade, personal satisfaction, benefit to society, and amount of stress involved, and this career path scored well in all categories.

With the high rating of software development as a lucrative and rewarding career, the projected 22 percent job growth for software developers, and the 500,000 open tech jobs across the U.S., the industry won’t be able to grow if women and minorities continue to feel out of place.

* Unfortunately, no demographic data was available and the survey was world-wide, with no data broken out by country. Next year, Stack Overflow.