Kasim Siddiqui spoke with us about his return to Seattle, his search for a more purposeful career, and the importance of a supportive spouse. Siddiqui received a scholarship to attend Code Fellows in 2015, and studied full-stack JavaScript.

What were you doing before Code Fellows? 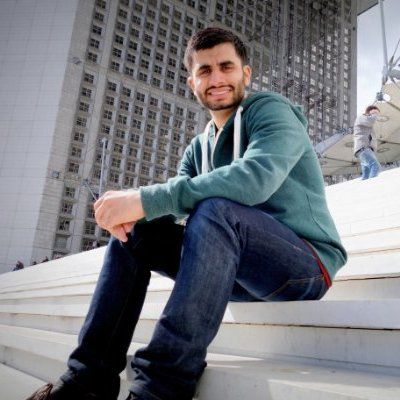 Before attending Code Fellows, I received a Bachelor’s of Materials Engineering from the University of Washington. Shortly afterward, I got a job at Intel in Portland, doing circuit editing.

A year before I decided to go to Code Fellows, I quit my job, and my wife and I traveled for a couple months. When we came back to Seattle, we spent time looking for work, and I was having a really hard time finding a job.

Basically, if I wanted to stay in material science, I would have to either do the same job I’d already quit, or move to San Francisco. It was a great job—but I didn’t want to do the same thing for the rest of my life.

Why did you choose the Code Fellows program?

I heard about the program from my brother-in-law. He was telling me about how his job was going to supplement the class for him and it looked like a cool program. I didn’t know what class I was going to take at first, so I just started with the introductory class.

Did you find the introductory class useful?

For someone who already has a decent knowledge in programing, it wouldn’t be too useful. But for me, I was pretty much brand new to it. I had looked at some code during my job at Intel, and had [taken] an intro course at [UW], but I didn’t end up doing so well in that class. For me, I definitely needed to take the introductory class before advancing into harder material, and the pace was perfect for me.

How many hours a week did you spend on homework and coding projects?

The classes are structured, so the first three hours in the morning are lecture. Then you have lunch, and then another three hours just to work on stuff.

Since I was commuting to downtown Seattle with my wife, I got dropped off an hour before class started. I took that extra hour—plus the hour during lunch, and “get stuff done time”—to do my class work and additional projects.

But, on the flip side, it felt good to challenge myself. I hadn’t done that kind of challenging work in a long time.

How would you compare university with a coding program?

University is more spaced out. You have one week of midterms and all of a sudden, you’re back to four weeks of slow-paced learning. Both coding programs and university programs have their balances and are good for certain types of people.

And if you already have a Bachelor’s degree, and you’re on a time crunch for switching careers, a coding program is a good option.

What should people be prepared for when attending Code Fellows?

You have to either have the cash laying around, or look for a scholarship. I was lucky because I had a received a scholarship that covered 50 percent of the tuition. But even after that, my wife and I used up all our savings.

If you want to do the full course—from beginning to end—you need like… 20 thousand dollars. I know a guy who put a second loan on his car just to pay for the class, you know?

I was in a big rush to get a job. I hadn’t been working for a year and my wife and I were running out of money. She landed a job at the beginning of my Code Fellows class, but we needed more money to get our own place.

I promised my wife I would be working by the time the class ended so, I tried to follow up on that. I started looking for jobs four weeks into the class and I got an interview by the seventh week (the second-to-last week of class)*. I started a job at K2 the Monday after [the course] ended.

I actually interviewed with a K2 before starting Code Fellows and they were one of the companies that told me to come back after I had some code experience. So, in between my two Code Fellows courses, I met with a hiring manager for lunch and she told me come in for another interview after I’d finished the program. I ended up getting the job!

What are you working on at K2?

When I started, we were in the middle of a product release cycle. They had me fixing bugs. From what I learned at Code Fellows, it was a very easy transition because I applied my learning right away. Once you understand the code base of your company, it isn’t very hard to catch up and pick up the pace.

My team is pretty small—only four or five people. We generally have a meeting in the morning to discuss the day’s tasks, and then I work at my own pace until the work is done.

Any advice you would like to offer to someone thinking about taking a Code Fellows class?

You can’t have anything else going on at the time. If you have other responsibilities it’s really hard. You have to put so much time and effort into learning to code and really work your ass off to do well in the class.

Is your wife excited about your career in tech?

My wife financially supported us at the time and helped pay for my classes and apply for scholarships, and she is really excited for me! She knew I wasn’t happy at my old job and we both wanted to move back to Seattle, our hometown.

What does your future career look like? Are you happy where you are now?

I keep forgetting to move my resume off of LinkedIn. Now that my profile is updated with my K2 information, I still get emails and calls all the time for other coding opportunities. Coding allows you to live in any city or country in the world. You have multiple career paths at your fingertips, but I’m happy with where I am now at K2.