What you were doing before you attended Code Fellows? 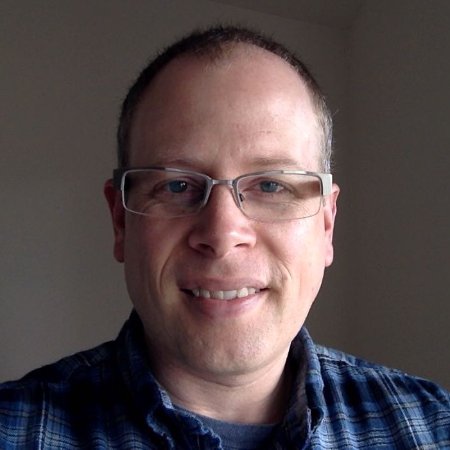 I had a pretty varied background before attending Code Fellows. I did a four-year hitch in the Navy as a submarine mechanic, and did four patrols on the USS Alabama. After I got out of the Navy, I went back to college and finished my degree, then held various jobs before realizing I wanted to pursue my childhood dream of being a pilot.

I used partial funds from the GI Bill® to go and get all my helicopter [pilot] ratings, and wound up as a helicopter flight instructor, and did that for a little over a year. I just kind of burned out on it. I got a job with JetBlue at Portland International Airport as an operations agent. I did that for six years part-time, and it came to the point where I needed something full-time, with better pay and better hours.

I didn’t want to go back to college for a second degree, so I started looking at other ways to retrain myself and I looked into coding schools.

Why learn to code?

It was a combination of things, really. I wanted better pay, with more hours and more stability.

Working for the airlines is rough in a lot of ways. It’s weather dependent, there [are] mechanical issues that crop up all the time… I just wanted something more even-paced.

You get one flight cancellation, or a snow day cancels a bunch of flights, and you’re stuck there. If you have to re-accommodate 150 people, nobody is going anywhere until it’s all done. You can never really count on your hours in the airline industry, and when you have two little kids, that’s something that doesn’t work out very well. I’d been interested in computers and programming for a long time, [but] I was a little hesitant because coding seemed really technical, and I was afraid I might not be able to learn it well. So, I put it off.

I began by taking a few computer classes at Portland Community College just to see how it went, and they were okay. The thing I struggled with was, you went into a class, they’d say, “Okay, here are databases.” But they didn’t really show you how to tie it into anything else, and that’s when I started getting frustrated.

Why Code Fellows in particular?

The thing that made me choose Code Fellows—because I did look at other schools—was that at the time, Code Fellows had a money back guarantee, which I understand is no longer offered.

That was one of the compelling things for me because it kind of signaled to me that, “Hey, if these guys are willing to stake the tuition on my satisfaction, they are serious about educating me.”

Editor’s Note: While the job-offer guarantee is no longer offered as a part of of our Code 401 courses, we still provide the same job-search support and career development training that has helped our students be successful. We’re continuing to build out this part of our curriculum to provide even more support to students in the future. Read More »

What was your expectation coming into your coding education—and then, what was the reality?

I don’t think I had a clear picture of what to expect. As I mentioned, I’d taken some basic classes at Portland Community College, so I had seen code before—but in very limited context. I definitely didn’t feel comfortable as a programmer.

I felt I was getting stuck, and that in certain situations, I didn’t even know what questions to ask. There are tutorials out there, [and] you can learn all this stuff online if you’re dedicated enough—but I tried that [and] I kept getting stuck on stuff. I kept hitting a wall and asking, “Well, what about this?” [I] figured it might be nice to have a professional or experienced instructor to interact with in those situations.

So that was my main expectation: for the money I spent on Code Fellows, I’d get to work with not only an instructor, but a group of people who I could hammer code out with all day—to help each other get unstuck.

It started out kind of slow for me: I was in the first or second class [that Code Fellows] offered in Portland, so I think they were still trying to figure out the operational aspect of it. But after the first week, it really picked up and things started going a lot faster. I was actually amazed after the class by how much we had learned in such a short amount of time [and] just being able to work in a group environment was really valuable.

What was the toughest part of the Code Fellows program?

For me, there was a certain point in JavaScript where I started to get confused and I remember that the whole concept of “this” really got me.

Once I finally got a basic understanding and it seemed that everything was going smoothly, these concepts would pop up that were, again, completely foreign to me. For a new person coming into Code Fellows, be sure to hit those pre-recs as hard as you can, because—with the pace of the class—the more you know going in, the easier it’s going to be.

Tell us about the job process and what that was like and what you’re working on now.

I went into the web dev bootcamp, which is now 201, with the intention of jumping directly into 401 afterwards, because they didn’t offer 301 at the time. During the last week of my bootcamp I decided to practice revamping my resume for a tech industry job. All my work experience up to that point had been other stuff.

I started by looking on Craigslist, seeing if there were any companies hiring my skill set, and I wound up on a listing for CollegeNET.

I spent a good afternoon reformatting my resume and filling out the job posting, and then I just kind of forgot about it. I figured I would never get a call back, so I put it in the back of my mind and started studying for 401. A few weeks later, I got a call from the manager at CollegeNET to schedule an interview, and we went through a series of steps: a phone interview, a coding challenge, and an in-person interview. I actually got the job!

I was blown away. I didn’t really think I had the chops to go out and be job ready at that point, and in my cover letter I used a phrase they had in the actual job listing: “I don’t have a lot of experience, but my classmates can attest that I ‘kick ass and learn hard’ at Code Fellows!“

After I had been there for a while my boss told me that when she was looking through the stacks of resumes, and was getting a bit tired, she saw that line and said, “Oh man, I have to read this one!”

Are you going to stay in the industry at this point?

Oh yeah, I am really happy with it.

I’m 41 years old, and have had a lot of jobs. But I’m coming up on a year at CollegeNET now, and still feel like I am learning new stuff every day, and I’m enjoying going to work—really flexible hours and good benefits and all that. I see myself sticking with it long term.

What set a Code Fellows education apart from your university education?

In a university class you expect to get lectured at and have a lab here and there, but I knew from the start that Code Fellows was going to be more hands-on, and that’s definitely what I got. We did have some lecture in the mornings, but we spent the bulk of each day actually coding.

You can read all the books you want on programming, but you’re not going to learn much unless you get out there and do it.

GI Bill® is a registered trademark of the U.S. Department of Veterans Affairs (VA). More information about education benefits offered by VA is available at the official U.S. government website at https://www.benefits.va.gov/gibill.