Mic'd: The Best New Recording App for the iPhone and Apple Watch

Our students have a natural passion for technology and continue to create awesome projects long after they graduate. Tim and Brian, two iOS developers who graduated in 2014, create a streamlined audio recording app that topped the charts and blew away their expectations. We talk with Tim about how his brainchild came to be.

Where did you get the idea for Mic’d?

Tim: I had been fishing around for a decent project idea that would allow me to hone my design and coding skills for quite some time. After all, the best way to learn is to do.

Sometime around Christmas I had the idea to make an app that takes advantage of the upcoming Apple Watch. A new product category is always a draw for me. How often do you get the opportunity to get in on the ground floor of something new? But if I was going to be in the App Watch Store on release day, I only had about three months to design, build, test, and release something. This meant that the app needed to be extremely simple, while still offering something useful that the watch could do. I picked recording because it checked all of those boxes. I also knew that if this was going to become a reality within that timeline, I would need help. I pitched the idea to Brian, he thought it was promising, and so we began.

How long did the app take to create?

Tim: We almost made our three-month deadline—missed it by only three weeks or so. The app definitely grew beyond our first vision. As we worked on Mic’d, we continually came to the realization that without this or that feature, the app wouldn’t be complete. This led to some real marathon weekend programming sessions to get it all done in time.

How is it integrated with the Apple Watch?

Tim: A big reason why the app grew way beyond our initial goals was that I realized it needed to be a really good iPhone app in its own right, regardless of the watch features. Mic’d is a beautifully simple recording app that dispenses with the clutter and lets you get right to business. It also makes it a joy to browse the recordings you’ve made, share them with others, and have a delightful time doing so. By the time we were done, the watch was just a fun, nice-to-have sort of thing.

Who worked on which sections of the app?

Tim: I designed the look and feel of the app, while Brian took the lead on the codebase. We both helped the other with their area of expertise—Brian gave me tips on how I might improve my design, I’d fix a bug, etc. The two of us actually pair-programmed for much of it. 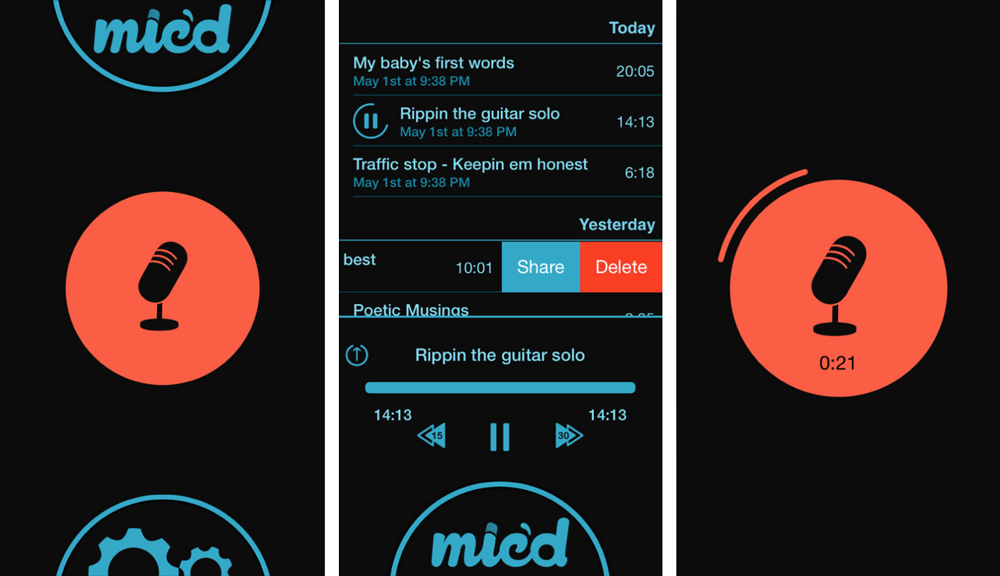 How has the reception of Mic’d been so far?

Tim: The reception has been incredible. We were featured by Apple on the App Store homepage in the “Best New Apps” category when Mic’d launched. We have since been featured multiple times and in multiple countries. Actually, a very large percentage of our users are in Great Britain and Canada. The one thing though, is that most people don’t leave reviews (me being one of them), but I can tell you right now, I really wish they did. Apps made by tiny teams like ours benefit hugely from positive reviews on the App Store, which I suppose is why you see so many apps asking for it.

Are you continuing to work on the app to integrate new features?

Tim: We sure are. In fact, it took us less than two weeks after release to add our first major upgrade: sharing. I am currently working on some really exciting features like transcribing your audio file to text so that it can be searchable. This is great because it will allow the app to organize itself for you. It will take much less work to find the exact recording you want in very little time. It is still very much going to keep seeing some love for the foreseeable future.

There is even a button in the app, at the bottom of the settings page, to send us feedback. We read every message we get. This feedback greatly influences which features we work on, and in what order. So keep it coming, peeps. We had a blast developing this app and I can guarantee that we will continue to make beautiful and interesting things in the future.