Have you ever thought about what kind of adventure you would create if you were a game designer? Now you can create your own adventure with Project Spark, a new game development platform by Microsoft Studios. After four years of production and its official release in October 2014, Project Spark is quickly gaining traction as users create their own games and play those created by others. Bradley Rebh, the project’s lead designer, shares how Project Spark came to be, and what’s in store for the future.

Update: Congratulations to the creators! Project Spark has been selected as a finalist for the 18th Annual D.I.C.E. Awards in the categories of “Family Game of the Year” and “Outstanding Achievement in Innovation.”

What is Project Spark?

Project Spark is a digital platform where anyone can make games, tell stories, or create whatever they can imagine. It comes with a set of amazing terrain tools, a massive library of props and an incredibly simple (but deep!) visual programming language called Kodu (which is an updated version of Kodu from Kodu Game Labs). We have an amazing community of creators always willing to help and you can play more than 100,000 community games created during beta and our launch in October. We’re free to download at www.projectspark.com, in the Windows 8 store, or XBox One marketplace, so there’s no excuse for not giving it a try! 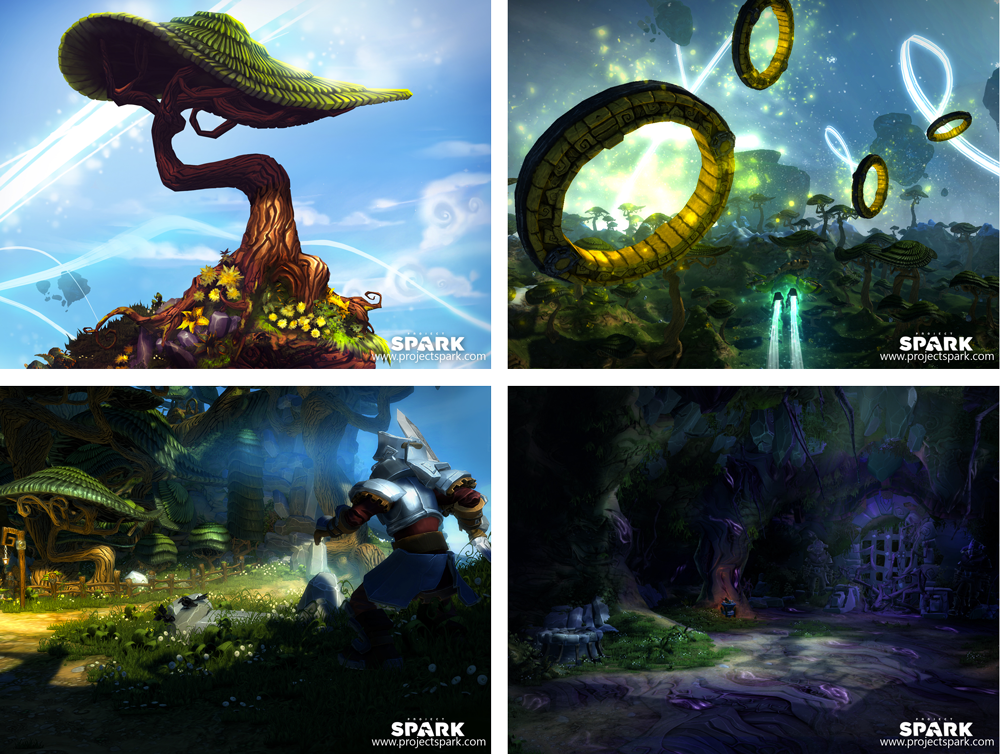 Where did the idea for Project Spark come from?

Saxs Persson (Team Dakota studio head) and Henry Sterchi (Team Dakota creative director) had a vision to democratize game creation. Making games with professional software comes with a massive learning curve. Every gamer has an idea for a game but no good way to build it. In Project Spark, you can build your games and tell your stories with a simple but powerful set of tools (and much less ramp-up time).

How long was it in development?

From the first discussions to today, Spark has been in development for about four years. Team size slowly built up over the first few years and peaked at around 80 people. Right now, we’re a lean, mean machine supporting a steady stream of monthly updates and regular DLC packs.

What is the overall objective or goal of Project Spark?

From a player perspective, Project Spark is the ultimate open-world sandbox game. There are daily challenges and community events to nudge players to create something, but largely, what a player builds is up to them. What we’ve seen is that as you’re creating, your imagination starts running wild and you make up your own “goals” as you iterate on your ideas. It’s the ultimate puzzle game because you make up your own puzzles and then get to figure out how to solve them with the Kodu tiles and tools you have available.

If you’re lacking inspiration, Spark also has two adventure modes built in. Champion’s Quest is a fun action/adventure game that tells a bit of Spark’s lore. Crossroads is a creation-light experience where you answer questions to make each part of the adventure as you play it. Both of these modes are built with the same creation tools that our players have access to, so they’re great examples of what can be built, too.

Who is the target audience?

Project Spark’s target audience is anyone who wants to create and/or play creations. The great thing about the create tools is that they scale. All objects come with behaviors built in so that you can simply drop props into your world to get started. Additionally, you can learn from these objects by opening their built-in brains to see exactly how they are programmed. You can also load a brain onto any object that you want. Our wolf creature, for example, comes with a brain that will have him attack you if you get close. If you want to make him your friend, you can load up the brain gallery and place an ally brain on him. Or give him a bird brain and he’ll then fly away when you get close. 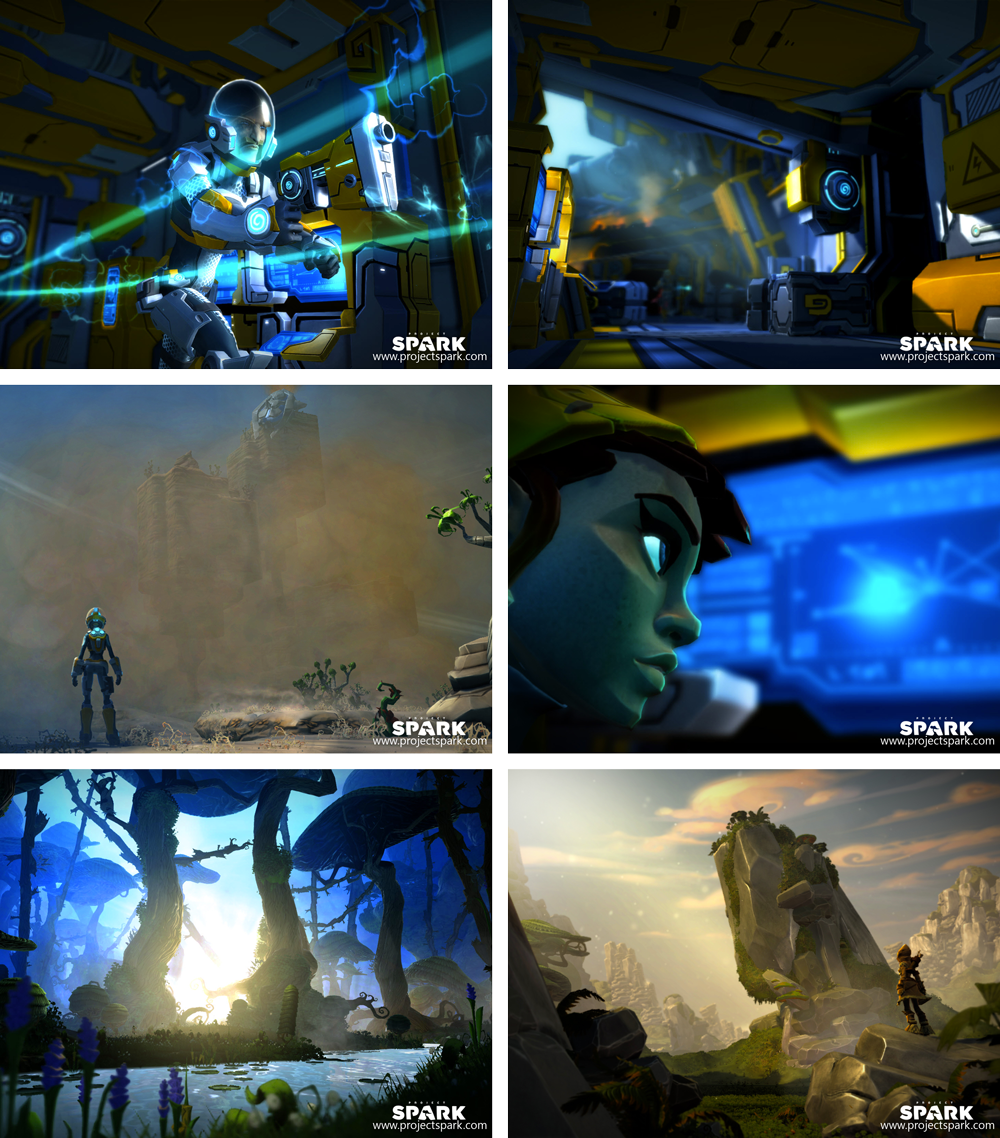 What has the reception been since launch in October 2014?

The reception has been fantastic. More than 1.7 million players from around the world have spent more than 3.6 million hours playing and creating (2 million of those hours were spent creating!). We just finished our first community gamejam, which was sponsored by Ford. We had more than 400 submissions in less than a month’s time. It’s been great to see the skill level of our community continually increase from alpha to today.

How are you measuring the success of Project Spark, and how has the reception fared against your expectations?

One way we’re measuring success is by the quality of the creations being built. My dream is for Project Spark creations to resonate outside of the Spark community and for our creators to end up on talk shows like Jimmy Kimmel Live or The Ellen Degeneres Show.

So far, a few of our creators have gotten some good buzz within the industry. Here are a few links to check out:

How is Project Spark being used to teach students how to code and create interactive games?

Our education efforts have just started to get rolling.

Partnering with AMD and the Boys & Girls Club of America, we launched two camps in Austin and Toronto. These workshops were for 10- to 14-year-old kids and were a huge success.

Additionally, this summer we introduced Project Spark to more than 30,000 10- to 14-year-olds through a two-day game design camp at Microsoft Retail Stores in 52 cities across North America. We’re hoping to launch another program this spring.

We’ve also integrated Spark into our first schools! Microsoft’s DX Team introduced us to the Eastside Preparatory School in Kirkland, Wash., which has begun to include Spark in its computer labs. We’ve heard of other after-school programs using Spark, but we haven’t been officially involved with those.

Just this week, The University of Alberta has launched a pilot with a handful of students to include Project Spark in one of their cross-discipline game design classes. This class is really exciting because it brings early engineering, design, art, and audio students together to create a game. I can’t wait to see what they make at the end of the semester.

Now that Spark is out there, we’re really hoping to dial up our education outreach in 2015. 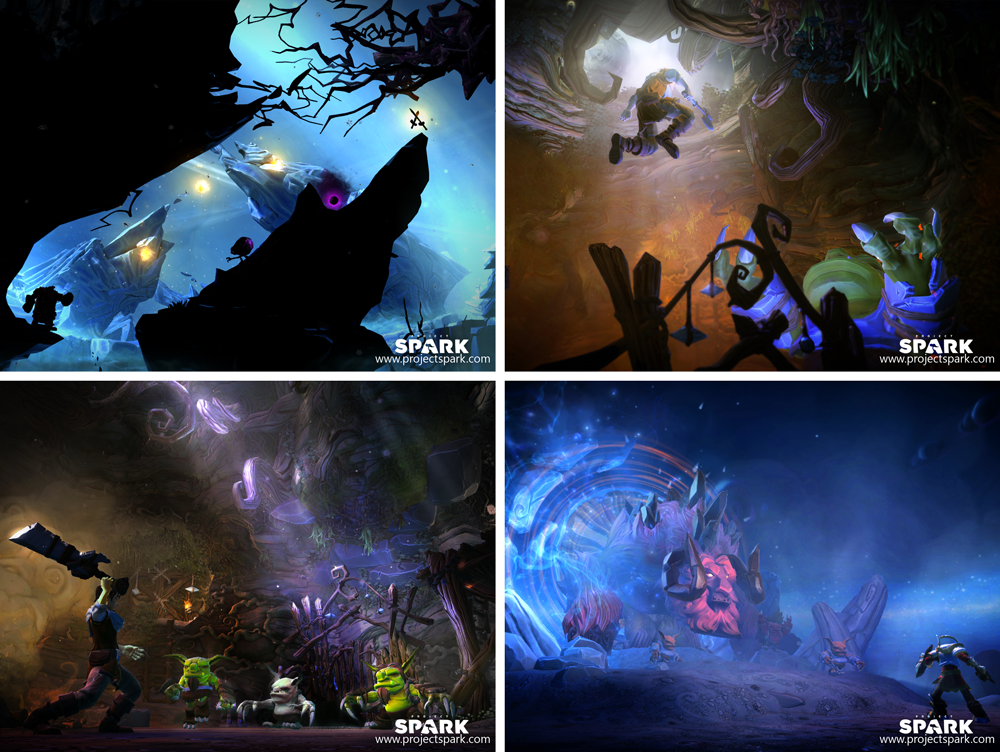 Is Project Spark an on-ramp to computer programming, or a paradigm for future non-game app development, in which ‘creators’ don’t really need to know how to code in order to build useful apps?

We didn’t necessarily set out to reinvent app development, but we did often ask ourselves: “How do we make game creation easier, quicker and more fun?”

Microsoft Research created Kodu Game Labs specifically as a language to teach kids to program. When we decided to incorporate Kodu into Project Spark, that was a very large draw for us. More than anything, we wanted a powerful language that was easy to pick up and—maybe more importantly—was really fun and safe to experiment with.

With that said, core to our vision was that anyone can make a game no matter their experience level with other languages. Koding in Kodu uses a visual programming language. It’s kind of like rearranging those refrigerator magnets that make funny sentences. Anyone should be able to read most lines of Kodu and be able to have some idea of what it does. It’s a little different than a lot of languages, but familiar enough to make transitioning to another language a natural experience.

Technology has never been more accessible and it’s definitely becoming more common for the average person to have some familiarity with a programming language. As more and more people take an interest in app development, I’d hope that platforms like Project Spark help shape the future of app development to allow anyone to participate. We set out to democratize game creation and digital entertainment. Maybe we’ll expand this vision in Spark 2.

Are there other organizations creating similar resources?

There are a number of other creation products out there, but none of them have the same mix of power and ease of use. Project Spark is a real game development platform, but is streamlined so that anyone can pick it up easily. Kodu is a great first programming language because it teaches structured thinking and logic in a way that other creation games don’t. These skills are foundational for other programming languages.

Early in Spark’s development, I had a chance to show Project Spark to a number of Microsoft Studios in the UK. While visiting the esteemed developer Rare, we were asked, “Let me get this straight. You’re making better and easier tools than professional game developers have and you’re giving them away for free?”

What have been the biggest surprises going from creation to beta to launch?

I’ve been most surprised by the usage patterns of different segments of our demographic. The play modes were specifically designed to appeal to our younger players and we always thought the create mode would appeal most to our older players. It has surprised me how quickly young kids are able to master the programming language. I’ve seen YouTube videos of 5-year-olds teaching their dad to program and I’ve heard great feedback from older gamers on the Crossroads and Champion Quest game modes.

Kids are fearless about technology and we shouldn’t underestimate their ability to learn.

What are Microsoft’s future plans for Project Spark and similar resources?

Spark will continue to evolve through monthly updates and regular DLC packs. Expect the Spark you are playing today to change based on community feedback and platform opportunities on the XBox One and Windows platforms. We have (literally) years of feature work to get to and we hope that anyone who is interested in digital creation will join us in shaping the future of this platform! 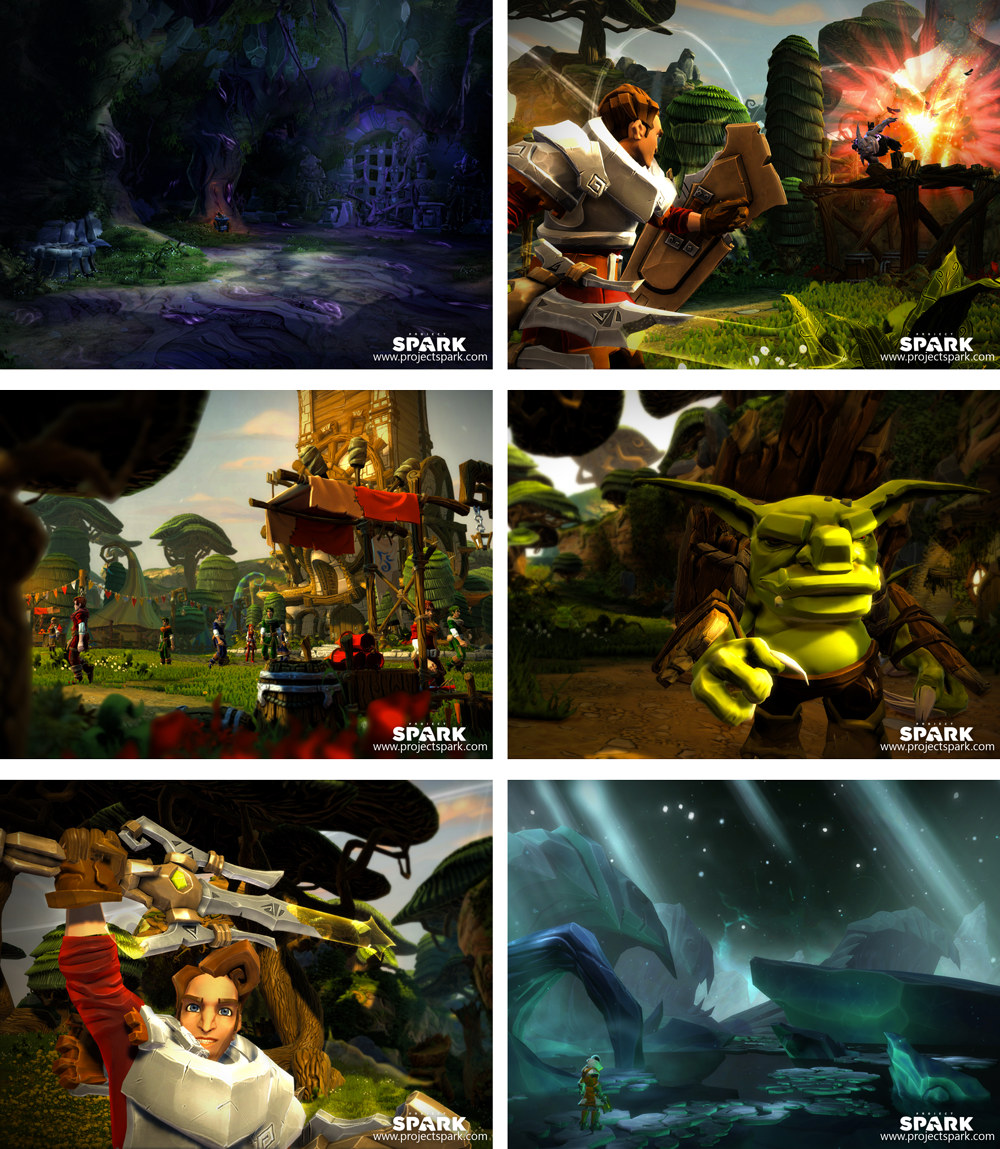 Any plans for expanding the project to Mac operating systems so that Mac users can play and create games as well?

At this time we don’t have plans to release Spark on other platforms. For now, you can play Project Spark for free on XBox One or Windows 8.

Did I mention that Project Spark is free to download? Create and play thousands of free games right now! If you’re interested in creation, you’ve got to try us out. Download Project Spark at www.projectspark.com, the Windows 8 store, or Xbox One marketplace today! 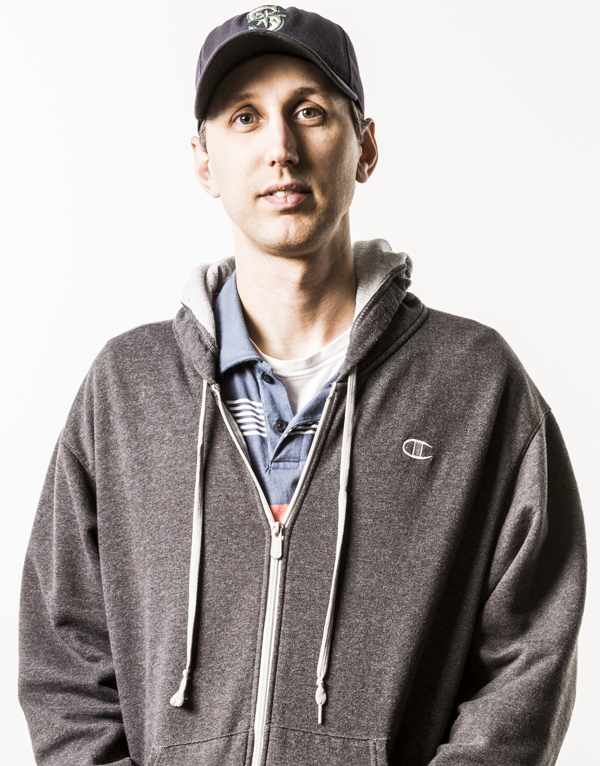 Bradley Rebh is a game designer living in Redmond, Wash. After more than 18 years in the industry, Bradley still enjoys making and playing games of all genres. Some of his credits as a game designer and artist include Supreme Commander, Supreme Commander: Forged Alliance, Digimon: Rumble Arena, Azurik: Rise of Perathia, and Dark Void. Bradley is currently working for Microsoft as the Lead Designer of Project Spark.